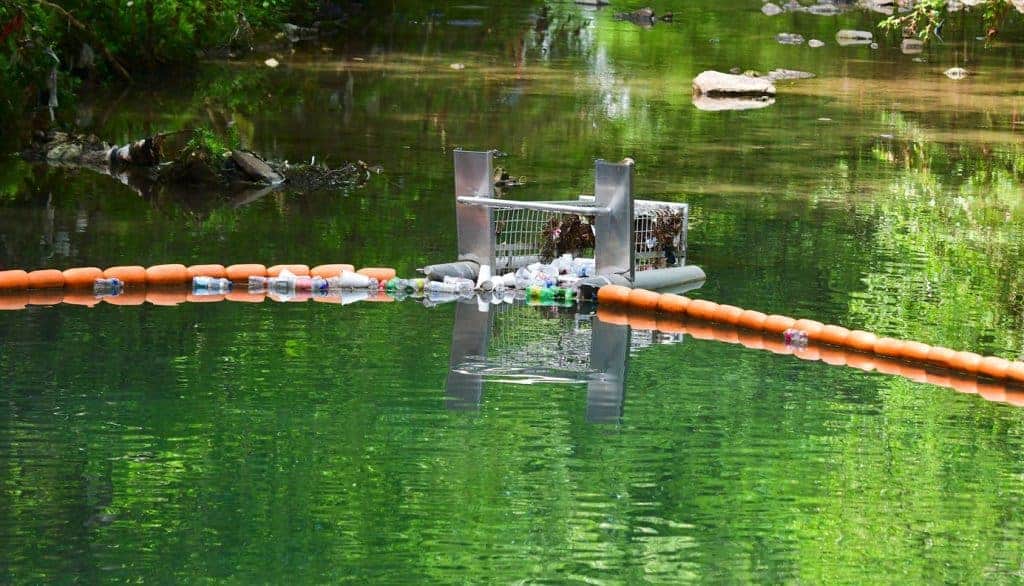 A Litter Gitter, installed by the Fresh Water Land Trust, collects bottles and other debris that flows in a creek off 7th Street North in Birmingham on April 9. Photo by Erin Nelson.

When it rains in the Birmingham-metro area, runoff flows into Homewood creeks and streams through the stormwater drains — including lots of litter.

Berkley Squires, the director of both Parks and Recreation and Public Services, started searching for a solution to this problem last year. In March, the city entered an agreement to install a Litter Gitter, an in-stream litter collection device.

It’s wide enough to stretch across an entire body of water, and it’s anchored down so that it won’t wash away with flooding. It traps litter in a cage-like device without disturbing the stream’s marine wildlife.

The Litter Gitter’s initial cost is $25,000. That price covers one year of renting the device from Osprey Initiative, which is the Fairhope-based company that developed the Litter Gitter.

“We’re not buying the equipment — basically, we’re contracted with them for their service,” Squires said. “They place it, maintain it, upkeep it and provide data. … We don’t have the manpower to do something like that.”

Initial tests of the Litter Gitter indicate an 80% or more success rate in preventing the downstream flow of floating litter, according to the Osprey Initiative website. Once litter is collected, the Osprey Initiative team separates vegetative debris from the litter, and recyclables are separated from other trash.

The city plans to first place the device in Griffin Creek off of Broadway Street. It’ll be there for three to six months, and then they plan to move it in two or three other areas, collecting data from each location to see which spot is the most effective for litter collection.

“I’m excited and anxious to see what those numbers come out to in the end,” Squires said.

Squires said the city will use it for a year and see how it does. After the first year, the cost to rent and maintain the Litter Gitter is $2,000 a month.

Not only does the device clean the waterways, but it will also be informative, Squires said. Osprey Initiative will be able to tell the city what types of litter are collected.

“It will give us an idea of what’s in there and what’s coming down,” Squires said. “Where are the heaviest amounts of litter coming from? And can we isolate those by putting the Litter Gitter in that area?”

Once data is collected, Squires said he also hopes to share this information with Homewood’s neighboring cities, especially because litter can travel from city to city through the waterways.

“Most of the people around here, in some form or fashion, utilize the waterways,” he said. “I think everybody has their part or responsibility to play to maintain our environment and waterways the best they can. This plays a small role, but I think the small role it can play can be very productive.”

Squires hopes to have the Litter Gitter installed sometime in May or June, he said.

This story originally appeared on the Homewood Star by Ingrid Schnader. Read the original story here.