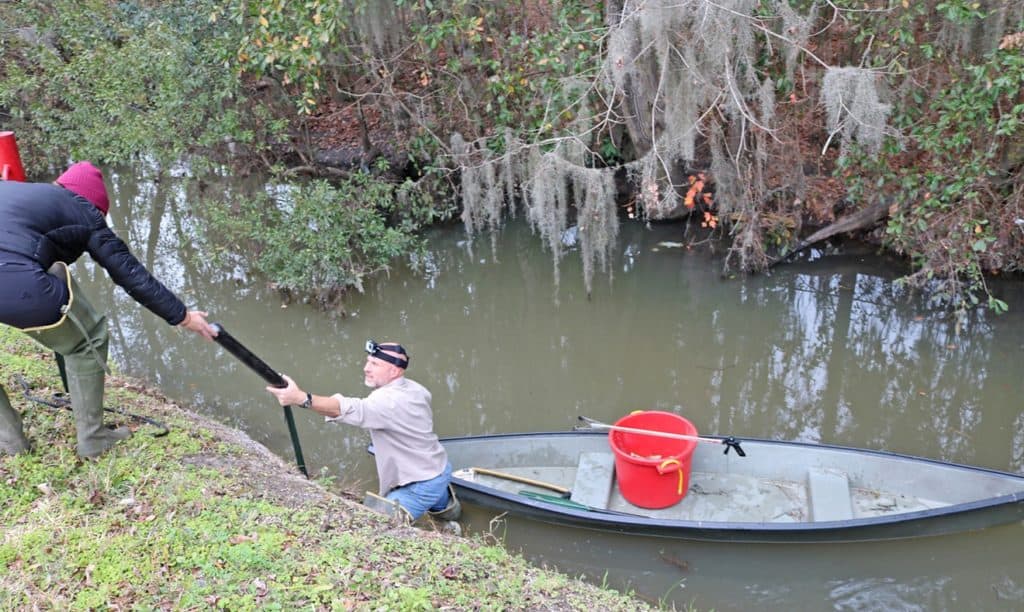 Ogeechee Riverkeeper (ORK) in partnership with The City of Savannah, has recently overseen the installation of two litter booms in the Chippewa and Harmon canals.

Designed and installed by Osprey Initiative, the booms are floating barriers that trap litter, such as plastic bottles from moving downstream. The booms were purchased thanks to a grant from the National Fish and Wildlife Foundation (NFWF), and are part of a long term project to protect the water quality and ecology of the Vernon River Watershed.

On February 1, ORK was awarded a Five Star grant from the NFWF, which provides support for the 501(c)3 organization’s “Protect The Vernon” project. According to ORK, the grant totalling $93,200  also includes over $45,000 of matching funds with support from local experts, municipalities and organizations.

Once the booms are full, they are emptied and the litter is collected, studied, cataloged and recycled if possible.

“We’re cataloging what litter is being found, and what kind of condition it’s in to tell us how long it’s been in the environment. All the pertinent information and data we collect  is for us to try and figure out where we can address the issue at the source. Obviously, some of us just litter. People throw trash out their car windows, but sometimes litter could be coming from a dumpster that’s not being managed properly,” said Damon Mullis, the executive director of ORK.  “The goal is to prevent pollutants from entering into the Vernon River and the salt marshes around cities. We’re all aware of how plastic pollution, once it reaches our oceans, causes problems for sea turtles and other animals.”

Mullis also explained that a large percentage of stormwater runoff and litter is deposited into the Vernon River through tributaries and canals. The Vernon River has been listed as “impaired” by the Georgia Environmental Protection Division due to the large quantity of pollutants entering its watershed.

“Right around 40% of the City of Savannah drains into the Vernon River.Every time it rains or we have a sewer spill, all that stuff ends up making its way through canals,  drainage canals and creeks in the city, and then making its way to our coastline marsh,” said Mullis.

The two booms installed in the Chippewa and Harmon canals mark the start of the organization’s long-term project with the City.

“It’s [the litter booms] kind of the beginning of a much longer project with hopefully lots of community involvement, that everybody can get behind to prevent all this litter and plastic pollution from getting in our waterways,” said Mullis.

ORK plans on having more booms installed in places that do not already have some form of litter deterrent in place.

Find out more information on Ogeechee Riverkeeper and their Protect The Vernon Project on their website ogeecheeriverkeeper.org.