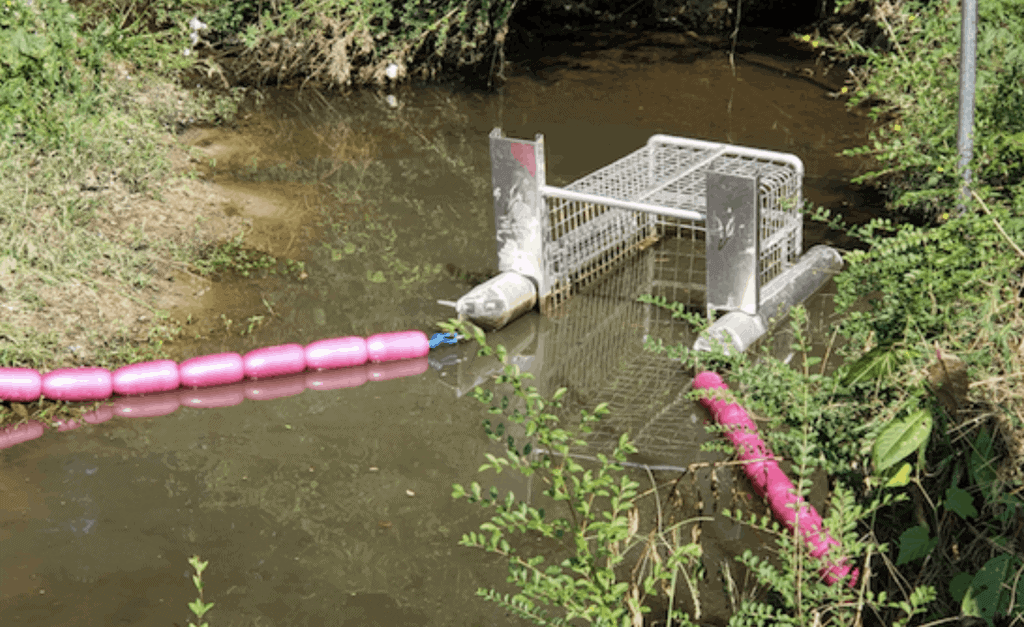 Coca-Cola has made another move that could help steer the company away from its current label of “world’s worst plastic polluter.”

The Atlanta-based beverage giant on Thursday installed the first of six trash trap systems in southwest Atlanta, on Proctor Creek, a tributary of the Chattahoochee River, built to collect downstream litter.

These “Litter Gitter” and “Bandalong” catchment systems support the company’s World Without Waste goal in Atlanta. The larger vision is to use the traps in multiple urban creeks and rivers to keep pollutants out of larger bodies of water, and eventually the ocean.

The Litter Gitter is a small-stream collection device used to intercept floating litter from stormwater runoff. It uses floating booms that guide trash to a large wire-mesh collection container. The Bandalong Litter Trap, made of high-density polyethylene piping, uses the current to guide debris into the Litter Gitter. Coca-Cola said it does not require nets or fencing, thus preventing harm to fish and other wildlife.

The company said the traps aim to reduce 80% of downstream litter in the creek.

The installations come through a partnership involving The Coca-Cola Co. (NYSE: KO), the National Recreation and Park Association, the City of Atlanta, West Atlanta Watershed Alliance, Groundwork Atlanta, Park Pride, and the Environmental Protection Agency Region 4. A Coca-Cola grant to NRPA supports the installation of five Litter Gitters and one Bandalong Litter Trap.

The first installation was held Thursday at Center Hill Park. Coca-Cola said the trash traps will be installed at three other sites throughout the Proctor Creek watershed: Grove Park, Proctor Creek Greenway-Boyd Elementary and the Future Proctor Park.

“Installing these litter catchment systems not only helps clean the watershed in Atlanta, but also revitalizes the neighborhood around Proctor Creek,” Coca-Cola said in a news release. “The visibility of the trash traps, educational programming and creation of local green jobs associated with the project will facilitate lasting change and foster environmental, economic and social benefits in the area.”

The traps follow a wave of moves directed at combating Coca-Cola’s massive plastic footprint, which has been a point of emphasis from environmental advocates who say the company’s recycling efforts have not gone far enough.

In August, Coca-Cola’s bottled water brand Dasani introduced a new initiative involving the use of a HybridBottle and expansion of its water dispensers. That initiative came weeks after Coca-Cola and rival Pepsico Inc. (Nasdaq: PEP) announced they were leaving the Plastic Industry Association, a plastics lobbying group.

Coca-Cola in January committed to making all of its products from at least 50% recycled materials within the next 11 years and to recycle the equivalent of every bottle it sells.

In June, The Ellen MacArthur Foundation published a study that found Coke produced 3.3 million tons of plastic in 2017.